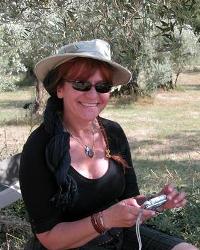 In 1999, she received a Diploma from State Fine Arts High School of Paris.

Since 2004, she organizes summer courses in several regions of France (Provence, Bretagne, Paris).

She’s the member of AIAP(International Association of Plastic Arts).

She has a lot of national and international exhibitions both personal and as well as a member of the organizations.

Her two works named as ‘CAGE’ and ‘LOVE’ were printed with the other 20 Master Painters by the support of the Who’s Who Art organisation, after her success in two exhibitions at the galleries “Mouvans” and “Château d’Auvers”-Paris.

She got a Bronze Medal in competition named as Concours International 2010 ‘Art Moderne and Contemporain’.

She become a member of “Société des Artistes Indépendants” in behalf of Grand Palais- Paris in 2010.

She represents our country by Whirling Dervish themes that is one of the greatest values of Turkey and she’got this Medal, by one of her paintings based on this idea.

Since 2011 she participates the “street festival” in Carpentras, which organised by the association “Les Papillons de Carpentras” in southern France.